Investigators report that mental health issues, whether factors were external or internal, made a difference in cannabis use. 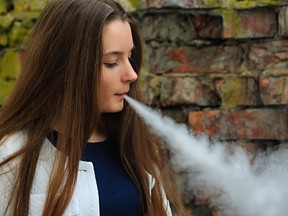 The study featured a group of teens as young as 12 who had never consumed cannabis. / Photo by Getty Images

E-cigarettes have proved popular, especially for young adults and teens. But these devices have also blurred the lines between tobacco and cannabis.

The study featured a group of teens as young as 12 who had never consumed cannabis. After the passage of some years, researchers found that cannabis use in adolescents was more common if those individuals already used e-cigarettes. Cannabis use was even more prevalent in teens who reported severe mental health problems.

Investigators report mental health issues made a difference, whether factors were external or internal. Externalized mental health problems include oppositional, impulsive or risk-taking behavior, while internalized refers to conditions such as anxiety and depression.

Individuals with externalizing mental health factors were more likely to explore cannabis, which may not be surprising. What did surprise researchers, however, was the “nuance based on the type of mental health problems that e-cigarette users are facing,” and how that impacted their cannabis use.

With the association between e-cigarettes accessibility and cannabis use, it’s important to understand the motive behind it. That understanding could allow experts to address these symptoms in teens and, hopefully, address them as soon as possible.

The FreshToast.com, a US lifestyle site that contributes lifestyle content and, with their partnership with 600,000 physicians via Skipta, medical marijuana information to The GrowthOp.