“With excessive government oversight and regulations that favor well-funded corporations, these trailblazers risk everything to fight for a piece of the ‘American Dream’ in the market they helped create.” 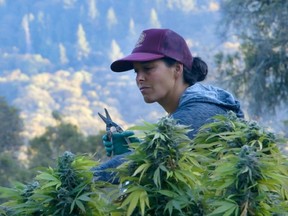 Filmed between 2017 and 2019, the documentary offers a window into the challenges faced by the women and the emergence of the legal market in California. Photo by Lady Bud’s Instagram

Lady Buds is a new documentary that follows seven women in California — farmers, entrepreneurs and activists — that attempt to navigate the state’s regulations and compete with corporate behemoths in the regulated market.

“In my film, you explore the challenges of the entire supply chain with the women who are directly engaged in it. I like to make films that I want to see, so I want to see more women in the positions of power in roles that are very positive,” Russo said.

And though it marks the feature length film for Russo, her award-winning short films have been broadcast on Showtime, Netflix, and PBS, among other networks.

Earlier this year, PBS broadcast the The Cannabis Question, a 60-minute episode of Nova, a popular science show that has been airing since 1974.

The episode investigated the research around the potential benefits and harms of using cannabis to treat conditions like seizures, autism, and insomnia, as well as the implications of the regulatory patchwork in US, where some states still maintain a complete prohibition on the plant.