Patients testing positive for THC were more likely than their THC-negative counterparts to develop delayed cerebral ischemia, have long-term physical disability and to die. 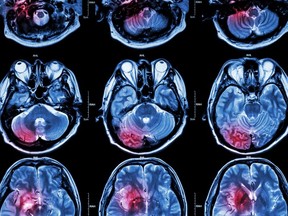 Image for representation. Compared to those who screened negative for THC, recent weed users did not have significantly larger aneurysms, worse stroke symptoms, higher blood pressure or more cardiovascular risk factors when admitted to the hospital. / Photo by stockdevil / iStock / Getty Images Plus

Recent cannabis users who experience a rare bleeding stroke called an aneurysmal subarachnoid hemorrhage (aSAH) are twice as likely to develop a dangerous complication that could prove deadly.

According to the American Heart Association (AHA), aSAH is a weakened and bulging part of a blood vessel that bursts on the surface of the brain. This leads to bleeding between the brain and the tissue covering it.

And that can have devastating results, with neurological disability occurring in about 66 per cent of sufferers and death during the follow-up period for about 40 per cent of cases.

Even with treatment to stop bleeding, symptoms such as speech problems and difficulty moving can develop among patients during the 14 days after an aSAH.

“This is caused by blood from the initial stroke irritating blood vessels, causing them to constrict enough to cut off the blood supply to a portion of the brain (called a vasospasm), resulting in more brain damage,” the statement explains. “This complication, called delayed cerebral ischemia, is a leading cause of death and disability after an aSAH stroke,” it adds.

Should aSAH occur in recent cannabis users, a new statistical analysis in the American Stroke Association’s (a division of the American Heart Association) peer-reviewed journal, Stroke, indicates there is twice the risk of developing delayed cerebral ischemia.

Calling the analysis the largest ever to examine what impact THC has on complications following aSAH, investigators analyzed data on 1,000-plus patients who were treated at Barrow Neurological Institute from Jan. 1, 2007 to July 31, 2019. All patients had been treated to help stop the associated bleeding.

Among all participants, 36 per cent developed delayed cerebral ischemia, 50 per cent were left with moderate to severe disability and 13.5 per cent died, notes a press release from AHA.

“We’re all vulnerable to a bleeding stroke or a ruptured aneurysm. However, if you’re a routine marijuana user, you may be predisposed to a worse outcome from a stroke after the rupture of that aneurysm,” notes the study’s lead author, Dr. Michael Lawton.

Compared to those who screened negative for THC, recent weed users did not have significantly larger aneurysms, worse stroke symptoms, higher blood pressure or more cardiovascular risk factors when admitted to the hospital.

That said, “recent cannabis users were significantly more likely to have also tested positive for other substances, including cocaine, methamphetamines and tobacco, compared to the patients who screened negative for THC.”

dr Lawton points out, however, that “of all the substances detected in the toxicology screen, only cannabis raised the risk of delayed cerebral ischemia.”

He suggests that people with ruptured aneurysms who have a history of cannabis use should “raise a red flag to the treating team that they are at higher risk of vasospasm and ischemic complication.”

Researchers, who are now conducting follow-up in the laboratory to better understand THC-related risks, “also urge further research to study the impact of various doses of THC on stroke complications,” the statement adds.

Looking more generally at cannabis use and all types of strokes, the American Academy of Neurology reported in 2020 that “the jury’s still out on whether the use of marijuana may increase the risk of stroke.”

For its part, a Canadian study published last year suggested there is “evidence supporting an association between recent cannabis use and history of myocardial infarction in young adults,” namely those aged 18 to 44.

“Increasing cannabis use in an at-risk population could have negative implications for cardiovascular health,” the study authors concluded.