The (arrested) rise of craft hashish in Canada

It’s no secret that the introduction of cannabis legalization has been below par in places like Canada. Since legalization in October 2018, industry experts have warned that projections by major cannabis companies and venture capitalists have far exceeded expected demand in the legal market.

Nowadays, large manufacturing plants are closing down, some before they even open. Dried flower stocks are on store shelves in shocking quantities (and degraded in quality), and a highly resilient illegal market accounts for an estimated 80% of the estimated $ 8 billion in cannabis. Neither of these things sound like grounds for optimism, but while some models for the cannabis business are dwindling, others are beginning to take root. It is crucial that new business models emerge that can hold their own against the robust black market in Canada.

The legal rollout in Canada could easily be described as chaotic, privileging larger companies with access to capital that have been able to meet the stringent and expensive regulatory requirements to operate legally. But in this case bigger certainly didn’t mean better. The product these larger companies offered immediately after legalization was of lesser quality and higher price than consumers would tolerate. In Ontario, cannabis supplied to legal dealers has no expiration dates, so retailers have no indication of what to sell first and consumers cling to a poor quality dry product.

The majority of existing cannabis users across the country prefer the fresher, higher quality, and generally cheaper product that they can easily find on the illegal market. That preference couldn’t be more clear when you look at inventory growth, which far outstrips sales in the graph below:

Which brings us to the heart of the matter: What will succeed in building the Canadian cannabis industry against the black market, which has decades of expertise and ingenuity?

Rising from the ashes: craftsmen and other small producers

The massive facilities like Canopy’s may be closed, but our friends at Althing Consulting tell us that those million square feet will be replaced with smaller, boutique-style add-ons on the 20,000-foot level that are set to be the future of the industry .

Consumers have consistently shown a strong preference for artisans and other small-scale producers who produce higher quality, more diverse products that better meet consumer needs. It didn’t hurt that prices went down too: Pure Sun Farms in Delta, BC, consistently sells their $ 100 ounce special, which is very competitive even in the illicit market.

This vision of the industry fits better with the image we have received from other legalization projects around the world. It is also in line with other indicators of success. Despite the small market capture of the legal market, the employment figures in the industry are still relatively high, especially when compared to more established legal consumer goods markets such as beer. In fact, craft cannabis growers employ almost as many people today as the popular craft brewing sector here in British Columbia.

To make the craft cannabis market competitive in both regulated and unregulated areas, the government must face four major challenges.

A December 2020 report by the Ontario General Auditor contained claims by the Ontario Alcohol and Gambling Commission (AGCO), the regulator for the cannabis industry in Ontario, that they lack the capacity and resources to manage the number of applications for private cannabis retail . Issues related to obtaining licenses, including long delays and difficult requirements, are common in all provinces. One way to illustrate this is to look at the very uneven distribution of business across the country in the graph below. 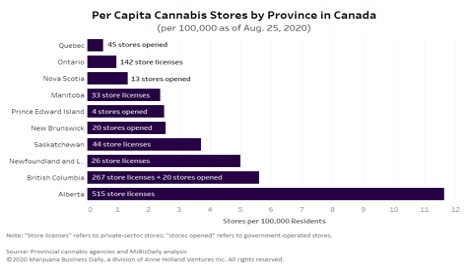 Smaller microcultivators, whose artisanal product of good quality is still in high demand, are still faced with unaffordable barriers to entry. Health Canada licensing is a tough challenge that everyone must face. The monthly reporting requirements cover more than 477 compliance fields. Without additional support in addressing these requirements – including automation technology to ease the administrative burden – these smaller manufacturers will struggle to meet the minimum legal standards required to survive in the legal market.

Even if all legal requirements are met, cannabis growers cannot sell their product from farm to fork (to borrow a set from the food industry). Many growers ship their product for irradiation to ensure it is below the acceptable microbial threshold set by Health Canada. While irradiation has a positive impact on the safety of the product, new evidence shows that it can affect quality by affecting the plant’s terpene profile. In addition, few facilities in Canada will irradiate cannabis products, which means companies sometimes have to ship the finished product thousands of miles to get their product to market.

In the next year, Health Canada is expected to lower the limit on microbes, making it virtually impossible to avoid cannabis irradiation. If Health Canada catches on, the change will be a challenge for small farmers who strive to prioritize quality, appeal to consumers who are increasingly educating themselves about terpene profiles and trying to minimize the environmental impact of production.

Finally, there is a marketing problem. Although the regulated market made dramatic improvements in product quality through legalization two years ago, Health Canada’s strict marketing restrictions mean that cannabis producers are virtually unable to communicate these improvements to consumers. Even at the point of sale, cannabis producers have little or no way of reaching consumers directly. Most legal sales are made through government and online stores.

What can a thriving, legal cannabis market in Canada look like?

The good news is that cannabis growers are driving change. Groups like BC Craft Farmers Co-Op pool resources, help each other navigate financial institutions that are still hostile to the cannabis trade, obtain licenses, and organize craftsmen who advocate meaningful regulatory changes with the government. Based on their support, the federal government initiated an accelerated review of the restrictive provisions of the Cannabis Act with regard to licenses for micro-classes and kindergartens in October.

Now more co-op models are emerging. Companies like BC Craft Supply are working to provide resources for licensing, quality assurance and distribution to craftsmen as well. Indigenous growers are also showing us how cannabis regulation could work differently. While indigenous cultivators currently make up only 4% of Canada’s cannabis licensees (19/459), that number appears to be growing. 72 new location applications are currently identified as indigenous cultivators, including 27 microcultivators. In September, Williams Lake First Nation signed a government agreement with the province of British Columbia to grow and sell cannabis. The press release announcing the agreement contains the following statement:

“The agreement supports WLFN’s interests in operating cannabis retail stores that sell a diverse selection of cannabis products from licensed manufacturers across Canada, as well as a cannabis manufacturing facility that enables the sale of its own artisanal cannabis products on the farm.”

A wider application of the farm-gate model, which allows farmers to sell their products to production sites such as a winery or brewery, has two advantages: it better supports local small-scale producers and offers opportunities in the canna tourism sector. As the economy recovers alongside the introduction of vaccines and travel-friendliness restrictions, provincial governments will have the opportunity to capitalize on the reputation of unique regional cannabis offerings (i.e., BC Bud) through these farm-gate operations.

While the history of cannabis legalization in Canada has had its problems, the clear path to greater success in the legal market is through increased support for microcultivators. With the increasing support of these small manufacturers in coping with regulatory requirements, more can enter the legal market and actually compete against their illegal counterparts. The result will be higher quality and more diverse products for consumers across the country.