We introduce: Matca Movies: The Argentine who casts a spell over the world along with his hashish pictures

Matías Nicolás Cardozo, also known as Matca Films, is the best cannabis photographer in Argentina. If you want to contest the title, you can write to us at [email protected]

In the meantime, let’s talk to the artist and tell you about his inspiration, passions and the development of his career.

Related content: Lelen Ruete’s cannabis photo: “The plant is artistic and suggests I strengthen it”

According to Matca, his relationship with photography is cross-generational: “The photography started with my grandfather’s hand, ”he says.

He taught her to appreciate the camera and see the world behind a lens.

“He told me all about his adventures and travels through his photos,” he explains, adding that this motivated him to pursue his own creative quest.

His passion for cannabis is comparable.

As many cannabis lovers know, the plant and its buds are often irresistible and beautiful. And they ask to be photographed.

Matca was aware of the potential of the plant and decided to combine his passions. However, photographing flowers at home was not enough for this ambitious artist. Without further ado, he packed his bags and went to California, USA, to find the photographic motifs he longed for.

“I traveled to California at a time when legalization was still ongoing and a lot of the farms didn’t want you to take pictures,” he says.

Matca recalls an opportunity when he offered to make a short film in a city in California while he was traveling. “A lot of farmers didn’t like the idea of ​​what happened when they were filmed.”

Fortunately, legalization continued over the years, and with it, suspicion and secrecy among manufacturers decreased. The market even reached a point where Matca and his team received calls about film advertising for legal cannabis.

Related content: Bentley Rolling: One of the best cannabis photographers in the world

Like someone who doesn’t want it, finding a passion resulted in a very interesting job opportunity.

“In my opinion, the picture is growing more and more,” says Matca. “Everything is sold from the picture.

“My recommendation is to trust your vision of things and create new, fresh material … Make any idea a reality, no matter how crazy it may be. You need to first create the type of art that you would like to be hired for in the future. “

In an interesting conversation with El Planteo, Matca shared numerous experiences that we will share with you in the coming weeks.

When asked about his favorite, something thoughtful spawned a visit to the Green Monkey Cultivators Farm.

“It was the most adventurous. It took us two weeks to create a series of videos and photos reporting on the stay on the farm. And when we finished the job, there was a huge blizzard that no one expected. 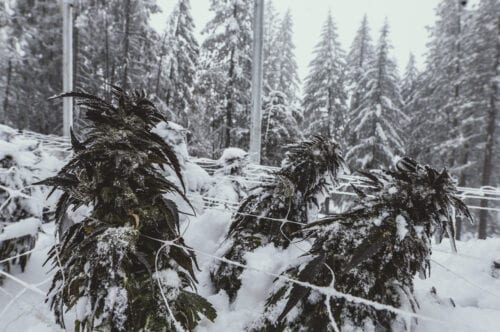 “We were trapped on this farm in the middle of the mountain until the snow fell so we could get out. It was crazy. Many of the greenhouses were covered in snow and the plants underneath were able to withstand the cold. This landscape of mountains, painted white and the buds sticking out … I think this picture wins the position of favorite. “

Finally, some info about the equipment Matca uses and their tricks to make the photos of plants and gears come out beautifully.

“Love it. Its size is perfect for porting and the versatility it offers you is great,” he says.

He uses Sigma Art in his lens equipment, which he highly recommends. “They have a very artistic and very lacquer-like tint.”

And now yes, a little peek behind the curtain.

“My advice is that you connect to the system first. It doesn’t matter what camera you use, what lens you have or what plants you have in front of you. First try to understand it, visualize it in its entirety … Sometimes the photon is on the branch that no one sees. “

Leisure marijuana legalization legislation is pending in New Mexico, however it could have a particular session

Ontario, Alberta, will end in a decline in Canadian hashish gross sales in January