Consider that Hobbits are peaceful, big on gardening, and possess what could only be described as voracious appetites. 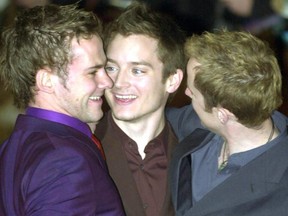 FILE: Elijah Wood (c) who plays Frodo Baggins in the “Fellowship of the Rings”, the first installation of the Trilogy “Lord of the Rings”, is greeted by two of the Hobbits at the World Premier 10 Dec. 2001, in London’s Leicester Square. / Photo by MARTYN HAYHOW/AFP via Getty Images

It may be a bit of a stretch, but a recent article on the Comic Book Resources (CBR) website suggests those smoke-loving Hobbits familiar to all fans of The Lord of the Rings may be opting for a bit of green in their regularly lit pipes.

The website asks: Is their pipe-weed Middle-earth’s version of cannabis?

CBR clearly acknowledges that JRR Tolkien — known to love his own pipe smoking, albeit the more traditional type, and whose habit may have inspired the relaxing pastime of the Hobbits and Gandalf — has said the smoked material is tobacco, not cannabis.

That said, the website still sees what it calls some “wiggle room” regarding that assumption. Citing The Lord of the Rings appendices, CBR notes that the Hobbits “imbibed or inhaled, through pipes of clay or wood, the smoke of the burning leaves of a herb, which they called pipe-weed or leaf, a variety probably of Nicotiana. ”

While Nicotiana includes tobacco, according to Gardening Know How, CBR suggests the use of “probably” opens the door to pipe-weed being something other than tobacco. Something, say, like cannabis.

There are also some attributes and habits of the Hobbits that perhaps make the link somewhat more believable.

Consider that Hobbits are peaceful, big on gardening and possess what could only be described as voracious want of food, what with seven daily chances to chow down from breakfast at 7 am to supper at 9 pm

Consider the movie scene where Saruman condemns Gandalf’s smoking with this shade: “Your love of the halflings’ leaf has clearly slowed your mind.”

To that, Gandalf later responds that if Saruman used the herb himself, “You might find that smoke blown out cleared your mind of shadows within. Anyway, it gives patience to listen to error without anger.”

The question was enough to inspire a Reddit thread a few years back. “In the books, it’s clearly tobacco-esque, but the movies always gave me the vibe it was a little danker than that,” one commenter noted.

The pipe-weed often went by names such as Longbottom Leaf, Old Toby and Southern Star.

“I think it was changed in the movies because there wasn’t an audience member under 40 who would have heard ‘pipe weed’ and not thought it was marijuana,” notes one poster on Reddit. “The Hobbits are a mellow bunch who don’t like to go too far from their houses. Eat too much and like a quiet life where nothing much happens.”